↓
Home→protest→WHAT THE MOTHERS OF ARGENTINA DID, WE CAN DO Log in 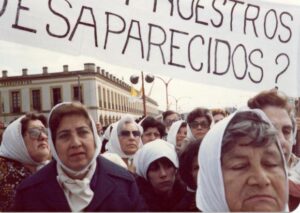 On April 30, 1977, 14 courageous women set aside fear and their families’ warning to leave their homes and confront the military dictatorship that had stolen and murdered their children. The went to the rotary outside the Presidential Palace and with signs and photos began a procession of protest. That day marked the first weekly march by the mothers of Argentina’s “disappeared” against the dictatorship that had carried out the systematic murder of thousands including their children. This simply action, repeated again and again, led to the collapse of the government and the restoration of democratic rule. Since then more than 1,000 torturers and killers have been tried and 700 sentenced. The fate of most, though not all, of the “disappeared” has been established.

Opposition to the coup that has taken place in the United States will not take place on social media, nor in the courts, nor through audits or new laws. Opposition and change will only begin when we take to the streets and exercise are right to peaceably assemble. The left will infiltrate and seek to turn these assemblies to violence. The MSM will play up every act of misconduct. But the power of the people in their anger if they persist will will out. It can begin in a single town at a single place. Against the government, against the newspaper or television station, against the police who have misbehaved. It will then spread to thousands of places across the country. We can again protest in our nation’s capitol and we cannot be ignored. Every action they take against us will only make us stronger.

What 14 women in Buenas Aires did, we millions can do. But we must take the first step, then the one after that, and all the rest until justice and democracy is restored.