The Naked Streets: The Shocking True Story of the Phoenix Sniper Murders and Baseline Killer 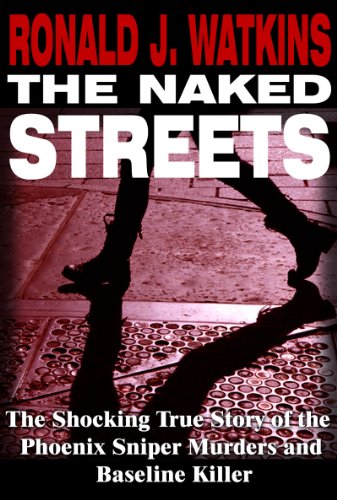 Enter the depraved minds of serial killers. From May, 2005 until August, 2006, Phoenix, Arizona, the fifth largest in America, was gripped in terror. A series of random sniper attacks, sexual assaults and murders continued at a relentless pace with no end in sight. The victims were both men and women, young and old, of all races and ethnicities. Most disturbingly, they had done nothing to place themselves in harm’s way. They’d not visited the “bad” parts of town, frequented a gambling den, solicited prostitutes or sought out drug dealers. They were assaulted and murdered as they went about the routine activities of their lives, the kinds of things we all do without a second thought. There was no reason for extraordinary diligence as they did so. They were gunned down walking along a street, kidnapped, raped and murdered from the neighborhood carwash while talking on a cell phone. Why had they been picked? What motivated the killers is selecting their victims? The police had no idea, and no idea why not one, not two, but three serial murderers were afoot. Throughout two long, hot summers the public also had no assurance the killers would ever be caught. Despite leads, despite increased vigilance, the crimes continued unabated. And when they at last mercifully ended, when the story of what had actually taken place become common knowledge, the public was shocked by the magnitude of the truth.