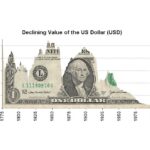 Venezuela, once the wealthiest country in South America, has been systematically looted and misgoverned by leftists for decades. The economic results have been inevitable. They have now issued a one million Bolivar bill worth just 53 cents. Hard to believe but not really if you have been following the story. The object lesson here is simple. In the past 14 months the United States has created half of all dollars ever printed in the entire history of the nation. Half. That means over the next few years the dollar will lose half of its value. But it won’t stop there because Congress plans to keep printing. The dollar is in a nosedive and the result will be to wipe out your savings. This is no accident. The GOP has given up and the Dems want to make you a dependent. This is no surprise. Every fiat currency ever created has fallen to zero. If you wonder why Bitcoin is booming spend a few minutes and study it. No government controls it. That alone makes it valuable. More and more companies are permitting employees to take a portion of their salary in Bitcoin. Look into it so you’ll have a future.