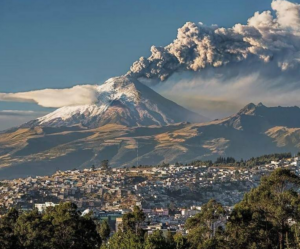 This will be the first of an ongoing series about living as an expat in the Andes in South America. I had thought to start this earlier but political events in America have distracted me but I’m finally moving on. I’d also thought I’d go about this logically, beginning with why become an expat, but in the end it turns out this will be a bit of a ramble. I’ll get to all the big questions but it will take several postings.

Before retiring to Cuenca, Ecuador I did a great deal of research plus my wife and I spent three months here getting to know the place. We talked to longtime expats to see what they liked and didn’t like. I aggressively searched for the negative as I knew people tend to want to affirm decisions they’ve made. I thought such measures were logical and that everyone did them. Not so. A shocking number of expats here had done no research and had never visited Ecuador before selling everything and moving here. Of those I knew personally, all have since returned to North America.

The first thing I discovered in my research is that half of all expats who move to Cuenca return home within two years. Half. By seven years, ninety percent have either moved to another country or gone back, with most of them returning home. So the odds of staying here until death are quite remote.

So why go back? Well, to be blunt, in most cases it’s the wife. After two years or so they tell their husband they did what he wanted but enough is enough. They miss the grandchildren and neither Zoom nor MagicJack cuts it any longer. I’ve watched contented husband after husband reluctantly give up their dream and return to what they once fled. The reality in my experience is that grandchildren have little to do with it. They usually move back to states well removed from where the grandchildren live. Wives miss the shopping and the freedom of driving their own car.

The conclusion to me is obvious. It will take eight years before you know if you are really going to stay here so do the self evident. Don’t depose of things to which you are emotionally attached. Put them in storage. If you own your house and don’t need the money from it to support yourself [in which case you shouldn’t come here] lease it out. You will most likely be returning to it.

Then, do research and I don’t mean International Liars, woops, I mean International Living. They are in the business of encouraging you to make the move. They cut deals with expat realtors who sell you overpriced real estate and kick back a fee to IL. That’s how it’s done. Check for blogs of those who have lived here a long time. Keep in mind that one long standing blog on Cuenca is operated by a Canadian couple who haven’t lived here for years and their information is very out of date. Search for negative news because it’s there and you need to know it. We have active volcanoes, earthquakes, street demonstrations, national strikes, just to name a few.

Also, plan to come here for at least three months, preferably more than once. A quicky one week trip won’t do. You will be dazzled. It’s like visiting Disneyland for the first time. You’ve got to get passed the glitz.

Finally, don’t get caught up in the excitement or romance of living abroad. There are many sound reasons for making the move, but those aren’t it. More to come in future postings. Take care. Be happy. Quit reading about politics all the time. Trust me, politics in America is above board and honest as the day is long compared to politics in Ecuador.