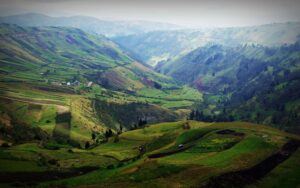 Time for some Pros and Cons on moving to and living in Cuenca, Ecuador where I’ve lived these past eight years. I’ve told friends for some months now that once the worse restrictions of this so-called pandemic have passed there will be a surge of expats into Cuenca. My reasons for thinking this is that many Americans will find they are no longer employable for any number of reasons. They will be faced with a retirement earlier than they expected and when they run the numbers they will see they cannot afford to live in the U.S. except as a pauper. So here are the Pros and Cons of Cuenca.

Pros – 1. This is a traditional society. It’s known as the Bible belt of Ecuador. Frankly, men are men, women are women. Sunday is family day as it used to be in the U.S. Courtesy and respect towards strangers is the norm. Vulgarity is unknown in my experience. 2. Cuenca is cheap. The cost of living here is roughly one third of what it is in the U.S., perhaps now with runaway inflation there it could be one quarter. You will live an upper middle class or upper class lifestyle here. Two friends of mine lived her five years or so, never had to touch their money in the U.S. and recovered from their losses in 2008, something that would never have happened had they stayed in the U.S. 3. Medical care is excellent, especially basic care. You will experience what it’s like to have a doctor be concerned only for you, not influenced by government rules, insurance restrictions or fear of a lawsuit. It is an eye-opening experience. Nearly every drug you’ll want is available without prescription, and cheap. 4. GMOs and antibiotics are not used in growing or raising food. They are prohibited by the constitution. Vegetables are wonderful. They are grown within five miles of Cuenca. There are no feed lots in the country. Chickens are not crammed into cages and live in the dark. The difference in taste, and in your weight, are amazing. 5. Speaking of weight. Because the city is over 8,000 feet above sea level which increases metabolism, because there is about one-third less oxygen digestion is less efficient and because you will walk so much more, you will lose weight. Typically, men lose 15 pounds in the first months. Now if you insist on eating out every day and persist in guzzling beer and wine and take a taxi every 15 feet you won’t drop a pound. But with little effort you can drop 30 to 40 pounds. I’ve noticed this doesn’t seem to happen so much with women. 6. Cuenca is the right size. It’s reportedly at half a million but that includes a vast area around the city. The heart of the city has about 100,000. 7. You don’t need a car. Few expats have them as they are such a hazzle. Taxis are cheap and plentiful, the bus system has its challenges so most expats don’t use it but I do and have no problems, we have a state-of-the-art light rail system, there is just no reason to own a car and it is liberating. There’s more Pros but those are likely the high points.

Cons – Keep in mind that more than half of expats who retire here move within two years. They just don’t find what they want here. Remember, no matter where you live you take yourself and your marriage. I’ve seen more than one 50 marriage fall apart under the pressure of constant contact and a few others that should fall apart. 1. There is more pollution in the very center of the city than I like which is one reason we live on the edge of the center by the river with its steady breeze. Pollution has improved enormously in recent years and its likely you’ll not notice it at all. The city is committed to reducing it even more. 2. There are too many cars on the streets. Ecuadorians love their cars. You won’t. 3. Cuenca is hard to get to and from. There are no direct flights here from the U.S. and won’t be for the foreseeable future. The advantage here is that we aren’t overwhelmed with expats. 4. You need at least some Spanish to get along. With smart phones this isn’t the challenge it once was but the more Spanish you speak and understand the more you’ll enjoy living here. 5. Specialty healthcare is suspect. I don’t know what to make of it as I’ve never needed it. I know one man who had a hip replaced here and is thrilled. Most expats return to the U.S. for such a procedure. The same for bypass heart surgery. There is a state-of-the-art cancer treatment hospital here. I knew one woman who moved here to take advantage of it. Most people I know return to the U.S. for treatment. 6. It can be boring. You need to be self-contained. You will have full access to all the U.S. media and entertainment but that may not be enough. It’s all but impossible to do charity work here and it is impossible to run a company. They don’t permit competition. There’s only one golf course and you have to pay $22,000 to join the country club where it’s at and recently they don’t seem to want to let expats join.

Finally, even though sixty percent of expats intending to stay here for life leave within two years, ninety percent are gone within six years. There are reasons. I’ve listed a few. But for myself and my wife it’s been paradise and having traveled the world there is nowhere else I’d like to live.