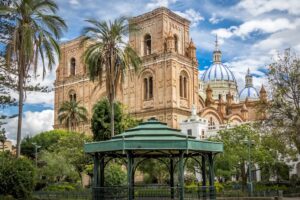 I’ve not written for some time. I can only blame laziness. But it has also been a very, very busy time. I have said from time to time that I never needed a social calendar until I retired. Just wait, you’ll see.

Christmas here in Cuenca, Ecuador comes at the peak of summer. A bit more sunshine, warmer days, so more outdoor activities. Many expats have trouble adjusting to the summer atmosphere but as I’m from Arizona I’m used to a sunny Christmas. The first week in November started the holiday season here with the huge celebration of Ecuadorian independence from the hated Spanish. It continues into December with various religious celebrations culminating in the Parade of the Children on Christmas Eve, one of the great events of South America. Some eight hours in duration with thousands of participants, costumes, dance, floats; first class and truly wonderful. The city fathers tried to cancel it again this year but under protest are allowing a severely restricted version. Hope it will be back in all its glory next year.

Then we have New Year’s Eve. Let’s be candid, Ecuadorians like to drink so put it together. The unique aspect is the burning of the Viejos. These are two-third human size dummies, many based on political figures, sold on the streets. Around midnight you stuff a note listing what you’d like to bury from the outgoing year, then you toss the thing in the street and burn it at midnight. Really. The first New Year’s Eve here we drove into the city from the foothills and it looked like Cuenca was aflame. The city government keeps trying to put a stop to the practice [it is prohibited this year but the Viejo sales are allowed so there’s no doubt what will happen] but they’ve had little success.

In January we have the celebration of the Three Kings visiting Jesus which is a huge celebration here and, if memory serves, is the occasion of a massive secular parade, all done in jest, in which everything, and every politician, is mocked. Great fun.

This is the start of the height of the tourist season and no wonder. A joy to live here.